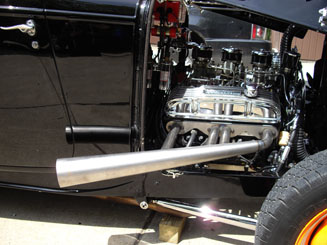 In 2000 I started working on a ’79 Corvette hot rod project. The plan was to rebuild the car from the suspension to the engine and transmission, and whatever else came along. The engine was being built by Rick’s Speed Shop and we decided on a 383 CI stroker motor with about 450 HP and a bunch of torque.

The one thing it absolutely had to have was a side pipe set up. After looking at the muffler systems that were available for the side pipes, and seeing that they were totally out of the question as far as performance and sound, I went to the drawing board with ALL the different types available. After choosing the style, and redoing the design for my application, a proto-type was built and tried on a 434 BB 68 Corvette. After much “tweeking” a workable model was built. Back into the 68 Corvette and once the engine was fired we knew this was it. Sounded GREAT. The Corvette left the shop for a performance run and the driver said the power was right there. After many dyno test runs, the power proof was established, and many levels of dB control are possible.

Anyway that single baffle idea for my Corvette project turned into a full time business. I have two patents and two more pending on this spiral idea. After 8 years of Spiral Turbo Specialties has 11 sizes ranging from 2.25” to 10” diameters, and the newest “tapered” baffles for Street Rods.

From cars to semi trucks we have your baffle. The Right Sound. The Right Power. Saves Space and Weight….